I just had an evening of frustration dealing with a major update (Windows 10 “Fall Creator’s Update”, essentially Service Pack 4) on a computer that went completely pear shaped.  In brief, I discovered that the update ‘broke’ an add-on piece of software called Classic Shell and also caused Windows Explorer to repeatedly start and crash, rendering the computer unusable.  Thankfully I was able to remove Classic Shell and restore functionality to the computer.  The next step was to obviously get an updated version of Classic Shell and reinstall it.

But much to my horror, the author of the software had just recently declared he was ceasing development of the project and turning it into an open source project.

For those of you that aren’t familiar with Classic Shell, among its many functions, the main feature restores the ‘classic’ Windows Start Menu from XP and Windows 7 in newer Windows 8, 8.1, and 10 operating systems. 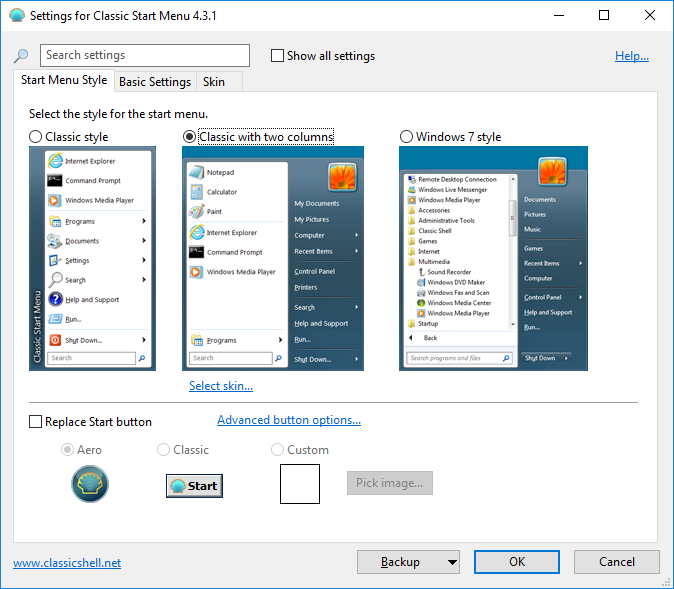 Windows 10 and the ‘New’ Start Menu

I try to keep an open mind about things.  I tried the Windows 8 and the much improved Windows 10 Start Menu.  What I discovered, as many other did, is that the old Windows Start Menu(s) are simply more efficient than the newer ones.  It isn’t just about familiarity and being accustomed to something else.  I really did use the newer Windows 10 Start Menu quite a bit.  I still use it on occasion.

The newer Start Menu(s) are bigger, more spread out, require more mouse movement, more scrolling, and have too many blinking or animated distractions for my taste.  The newer Start Menu(s) are really more difficult and cumbersome to use than their predecessors.  And as big a target as it is, I’ll just the let the subject of that joke of a Start Menu in Windows 8 lay.  And yes, I know the newer menus can be customized, but I want something better.

Another Origin and a Small Aside

And apparently there were others that thought the same thing.  Chief among them is a man named Ivo Beltchev, the creator and main developer of Classic Shell.

And on a brief side note; Why did Microsoft not include previous versions of the Start Menu for the newer versions of Windows?  We know it can be done, essentially by one person.

Windows 95, which had a radically new user interface, included the File Manager interface from Windows 3.1.  Microsoft did that for the sake of users who would find it more familiar and were more comfortable using the old system.  So why not do something similar with Windows 8, 8.1, and 10?  I’m not going to speculate on their reasoning, but I do know from personal experience and helping many of my clients, it was quite rude and inconsiderate of Microsoft not to allow users to make their own decision on what Start Menu to use.

And as it turns out that was also the genesis of the Classic Shell project.

Today, Him, and Myself

After more than a decade and a half at the helm of the Classic Shell project, Mr. Beltchev announced he would no longer continue development of the project.  In a final magnanimous gesture, he then turned the entire endeavor into an Open Source project in the hopes that others would pick up where he left off.

And that’s where I decided to step in.  I am by no means a developer of his caliber.  I’ve programmed with BASIC, Visual BASIC, HTML, PowerShell, VBScript, batch files, ‘bash’ files, etc., but nothing on his level.  So that probably makes me a very poor candidate to continue the project.  At least as far a programming.

In my professional life, I’ve worked for myself for the vast majority of my life and owned several businesses.  I started my first solo business when I was 21 while I was finishing college.  Prior to that, my very, very first business was a partnership publishing a small college magazine when I was 17 and still in high school.  That was followed by another partnership in a carpet cleaning business after I graduated high school and was beginning college.

So as far as business, I believe I do have a bit of something to contribute.  So I will.

KickStarter (and yet another origin)

And I did.  I have decided to unilaterally start a KickStarter project.  I hope it’s a good idea and other people that like Classic Shell will get behind this project and contribute.  And not just monetarily.

I believe that the best shot for keeping this project actively and enthusiastically developed is to bring money into the equation.  I also firmly believe the project should be kept open source, but there also has to be monetary motivation to keep the wheels of this project greased.  So that’s the direction I’m initially going to go.  If more people join the project and it’s decided that a different approach should be taken, well, that’s what will happen.  I don’t know what the final path will be, I just know the destination needs to include continued development of the Classic Shell.

I’m also really hoping that possibly Mr. Beltchev can be enticed to return to the project in some fashion.  But only of course if he finds it satisfying and fun to continue.

For the rest of the Classic Shell story, head on over to KickStarter to read the rest of it.

For the rest of my KickStarter Adventure, read about it here.

One More Item and Full Disclosure

The computer mentioned at the beginning of this story wasn’t mine.  Classic Shell has been removed from that computer and cannot be reinstalled because it causes the same problem, rendering the computer dysfunctional.  As part of my research into the issue, I read that some people had learned that if one uninstalls Classic Shell before the FCU / SP 4 update is installed on Windows 10, and then reinstall the most recent version of Classic Shell, it will work.  So I did.  And it did. I have no idea why it works, but it does in my case and apparently for others.  And don’t get down on your self if you didn’t do it that way, because it isn’t exactly something that one would put under the category of intuitive knowledge.  I mean why would uninstalling a piece of software before an update and then reinstalling it afterwards preserve its functionality?

My computer is running Windows 10, version 1709, Classic Shell has been reinstalled, and the computer works just like it should. 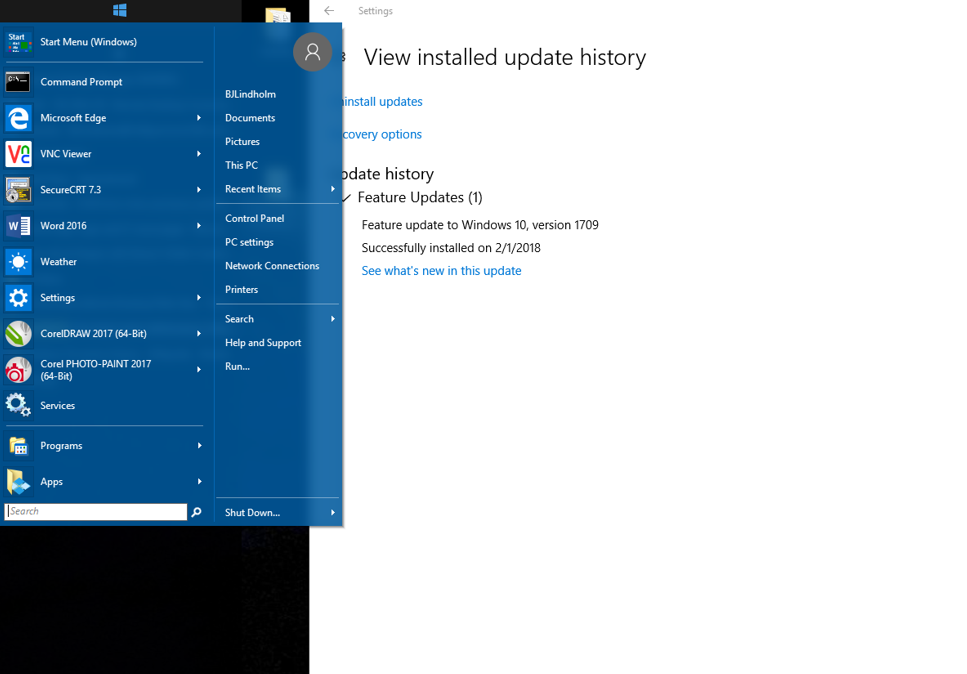 That means I have no immediate need for a newer version of Classic Shell.  But one day I probably will.  That’s one of the reasons I started this journey and later discovered there were many additional reasons to continue the journey.

I’m proud to announce publicly for the first time my involvement as an editor for Mr. Harriman on several different projects.  He has given the green light for promoting several new web sites in support… Continue Reading Mr. Harriman

Preface I am creating a KickStarter project. I’ve never done this before and I don’t know exactly what to do, but I also know that I’ll figure it out.  So here goes. To understand why… Continue Reading KickStarter; The Adventure Begins