What was it like to write something a hundred years ago?  A few hundred years ago?  And those aren’t even the right questions.  Steven King (yes that Mr. King) has utilized long hand on paper pads, typewriters, and word processors.  So we don’t need a time machine to figure those things out.

But that’s his experience and probably not mine or yours.  He could tell us about his experience, but that is not the same at all.  A craftsman can describe building a desk and even show one how to do it.  But that isn’t the same as knowing how to build it well and then building it.  One has to do it to know it.

There’s a strange divide I straddle between Hi-Tech and Lo-Tech.  I learned to type (touch type specifically) when I was in the ninth grade.  It was a two quarter (we were on the quarter system, not semesters) class my high school offered. 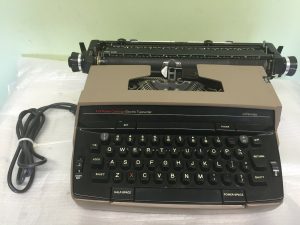 My Dad’s Typewriter (except for the color, his was black and grey)

Here’s the first interesting twist that doesn’t seem very interesting until one considers the second twist.  The first twist really isn’t a twist at all until the second one comes into play.  It’s sort of an odd Ying/Yang thing.  Anyway, the reason I wanted to learn how to type was so I could more easily make use of these really new computers that were becoming available to the general public at prices almost anyone could afford. 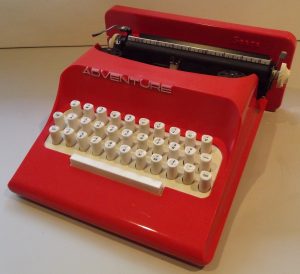 I’m sort of giving myself away in terms of age by admitting the first computer I was exposed to was a Commodore CBM 8032 (and a SuperPet 9000).  Although I will say, that model was a couple of years old when I started using it.  After that, I moved up to a Commodore 64K (although it was a move down in terms of BASIC, from 4.0 to 2.0). 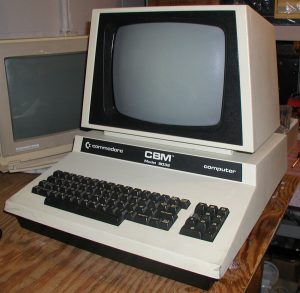 OK, now for the big reveal.  The Typewriting Class that I took utilized…, typewriters.  Yes, the name of the class sort of gives it away, as opposed to something like Word Processing Class or Touch Typing Skills.

I’m thinking about it today because of how the tools I use today affect what I write (the entire process, including editing).  Remember, with a typewriter, when one makes a mistake, it is a laborious process to fix it.  Oh, I should mention that the typewriters we used weren’t the newest (they weren’t the oldest either, as they were electric).  They had no built in capability to correct mistakes (the typewriter in the background of this story is far more advanced than what I had).  Correcting a mistake meant scrolling up (see how long it’s been?, that isn’t even the right typewriter term), maybe it was “rolling up” the paper.  IE, turning the platen “feeds” the paper up.  Anyway, it was a matter of adjusting the paper such that the error could be reached and then painted over (with Liquid Paper, thanks Mrs. Nesmith) or erased with a special eraser very carefully.  Whether using Liquid Paper and waiting for it to dry or the  process of carefully, slowly, gently erasing a mistake without ripping the paper were both very time consuming.

That’s the twist, or more accurately, those are the twists.  I wanted to learn how to touch type and ended up learning how to do that on a typewriter.

And towards the end of this short story I find myself unhappy or not completely happy with the structure of the narrative I’ve presented.  It doesn’t properly apply the journalistic inverted pyramid very well, so it won’t be as appealing to a reader as it could be.  But then again, I don’t want to do the big reveal in the opening…  Ahhh!  Editing sucks.

But aside from that, I can say that the biggest difference between now and then, at least for this part of the process, is that there is no way on this planet I would ever go back and try to correct what I had written (err, typed).  I’d start over on a new piece of paper, albeit with hind site and my first draft in hand.

Keep in mind, I also never brought up the subject of a thesaurus or dictionary.  For anyone who is younger, those things are books, not just functions in a word processor.

Oh, great idea for the next step in the evolution of transferring thoughts and ideas to a medium other than one’s own mind (and not just recording sensory input like in the Christopher Walken movie, Brainstorm) would be…  Not sure what to call it, but it would be a method of transferring thoughts straight to words, with all the piddly stuff like spelling and grammar taken care of automatically.  But would it be as good?

Pure ideas, transferred eloquently, perfectly, into written form to read.  What is missing?  Oh, yes, why not just transfer the entire memory into another person?  Where do we stop?  Well, thankfully, that is a question for another person on another day.  Today, after looking far into the future, that we aren’t anywhere near, I’m saddled with figuring out how to do the best with what I’ve got (which is a lot), but trying to craft it in a way that was done in another era.

And that is what I straddle.  I have a foot in both worlds.  I’m not a young kid that has always had a word processor and is trying out something old fashion.  I had a word processor and wanted to learn how to type and ended up using a typewriter because of what my school had available.  And yes, there were “learn how to type programs” available that I used too.  But as old fashion as the technology was, I wouldn’t trade it for the world, because what I learned was invaluable.  Thank you Mrs. Tolbert (didn’t even have to look up her name, I remembered it, that’s how important she was).

In the end, figuring it all out is going to take some time.  But I’ve got one advantage over many younger writers and editors.  I’ve used all the tools.  Now if I could just remember how to use them…

And as I come back to visit this after taking a break, there’s one more thing.  Of all the books I love, from all the brilliant authors out there, with all the wonderful ideas and rich characters, there’s one thing I’ve noticed upon reflection.  Some of it isn’t written as well as it could be.  In fact, some parts of even great books sucks in how it was written.  Maybe that’s the hint.  There are no “Good ‘ole Days”.  Try reading The Old Man and the Sea and focusing on the words, sentences, and paragraphs.  It is horribly written, difficult to read, and could be done so much better.

But then again, Mr. Hemmingway didn’t have a word processor.  I’m sure if he’d have one, everything he wrote would have been written better.  But I also worry that the content might suffer or something might be missing.  After all, the wood grain surface of an old desk is often very beautiful, but at the same time, it’s a long way from perfect.

So in the “new end”, what if I write and edit, pretending I’m using a typewriter?  IE, just write, don’t correct anything, even stupid spelling mistakes (the automatic spell check is already turned off).  That’s a start.  But what about sppeed (see, right there, I put too “ps” in there, how appropriate to do that on that particular word)?  In know (there I did it again, meant to typ (and again) I, instead of In) I type faster now than when I was using a typewriter (even though speed was a factor and hw we were gradesd) (look at that, two mre, three more typos).  I know for a fact, just based on this past paragraph how sloppy my finger siklls have gotten in terms of favoring speed because I know I can go back and correct things.  But is that so bad?  Maybe a hybrid model?  Correct some stuff that takes a split second, but leave the bigger things.  Isn’t the solution always somewhere in the middle?