While editing several stories today I found myself mired in a quandary on how to present a series of events.  Should it be done chronologically or using the Inverted Pyramid method employed by journalists?  To warm up I rewrote a famous news paper article from the New York Herald detailing the events of President Abraham Lincoln’s assassination. 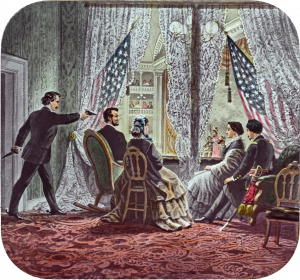 Below is the newspaper article as it was written in 1865;

Some deference must be paid to differences in writing between that era and now (Twenty Two Zero).  My focus was on making the article more concise and adhering more closely to the aforementioned Inverted Pyramid.

The details I chose to eliminate were the bodily locations where individuals were stabbed as it didn’t seem to add any useful information.  Plus it seemed a bit too graphic adding it as an additional detail at the end of the article, given the year of publication.  He got stabbed and he’s dead, whether the stab was in the face, chest, or stomach doesn’t matter as much as he’s dead.  For me it’s the equivalent of falling off a 10,000 foot cliff VS a 2,000 foot cliff.  In both instances the final result is hitting the ground (at the same speed) and death.  The difference being the length of time it takes to arrive at the end result.

The image used in this post is ironic because often times writers metaphorically feel a bit like president Lincoln did in this picture.