Man in the High Castle – A Granular Issue

Subject; The Man in the High Castle.  An Amazon series based on the Philip K. Dick novel by the same name.

The writers, directors, special effects people, cinematographers, etc. for this TV series have all done a fabulous job.  But they made a mistake in episode 8 towards the beginning where a main character is working on a gun replica.  The scene shows a close up of him boring out a gun barrel.  It was even confirmed by the words of another main character later in the episode that he was boring out a gun barrel.

For most people it’s just a good shot that contributes to a great story.  For anyone that is a machinist, they looked at this and if they spotted it, they’d call, “BS!”

How come?  Well take a look at the scene… 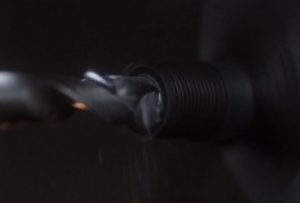 That’s a drill bit, not a reamer.  How come that’s important?  Well, first look at what a reamer typically looks like (well, a hand reamer at least, machine are similar)…

So, good effort, but big mistake here.  I only point this out because of all the granular effort that has been put into this series to make it look so legitimate as a ‘time piece’.