I lost my Weightlifting Belt!

The good news is that I got it back.  That part of the story isn’t even the interesting part.  The interesting part is belts history.  And it is quite a history, because it is an old belt.  It’s going on about 35 years that I’ve had it.

Before losing it last week, there’s only one other time I’ve ever lost it.  That was when I was teaching a class in St. Louis, MO and working out at a really, really nice YMCA club.  Sadly, I was a bit stupid and naive in not putting a lock on the locker at a gym in a big city.  had left it in while doing an upper body workout when I didn’t need it and someone stole it.  My excuse for not using a lock is that I’m a small town boy and never had the need to use locks on a locker (weird, right?)  Somehow, some way, an employee throwing out some trash, found it in a dumpster out back.  I was very lucky to have gotten it back.

I originally bought the belt at Hibbett Sports at the Village Mall in Auburn, AL.  It was back in the day when malls were the place to shop (not so much these days).  At that point in time Hibbett Sports was located in a newer section of the mall right next to a major anchor store, JC Penny (it was major way back then, again, not so much these days). 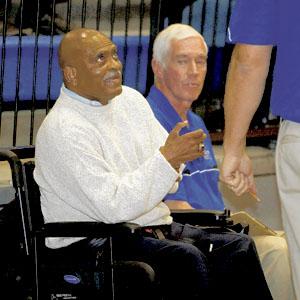 The person who sold me the belt was David Ogle.  I knew him as Coach Ogle from my Junior High School gym class days.  He even recognized me, which is saying quite a bit, since I was a bit of a geek in Junior High School.  I still remember to this day how nice he was.

Coach Ogle has had an amazing career within the Auburn School System and has touched many lives in a positive way.  And he made a contribution to my life too, both in Junior High School and on the day he sold that Weightlifting Belt to me.  After all, it’s decades later that I’m writing this and I still remember the history of the belt.

When I got the belt it was quite stiff, as most weightlifting belts made of leather are.  Over the decades that I’ve been using it, the belt has softened quite a bit.  It has groove marks worn in it from the thousands upon thousands of times I’ve put it on.  I’m only two notches larger than when I first used the belt (from weightlifting, not excessive food).

I’m so happy that someone was nice enough to turn it into the lost and found at my gym.  I’d be really sad without that old friend.  A big thank you to whomever that was that found it and turned it in.  And also a thank you to the gym for having a lost and found for it to have a safe place to live temporarily.